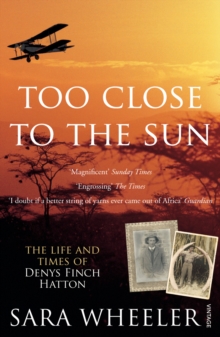 Too close to the sun

After a dazzling career at Eton and Oxford, he sailed in 1910 for British East Africa.

There, he first had an affair with the glamorous aviatrix Beryl Markham, and then - famously - with Karen Blixen, a romance immortalised in her memoir "Out of Africa". "No one who ever met him", his Times obituary concluded, "whether man or woman, old or young, white or black, failed to come under his spell. "Too Close to the Sun" is a story of big guns and small planes, princes from England and sultans from Zanzibar, marauding lions, syphilis, self-destruction and the tragedy of the human heart.

Sara Wheeler tracks her quarry from a dreamlike Edwardian childhood in a Lincolnshire mansion through to the battlefields of the East African campaign - one of the last remaining untold stories of the First World War.

An elusive hero in the mythic story of the British settlers in East Africa, Finch Hatton was the open road made flesh, and Wheeler uses his biography to illuminate a generation.