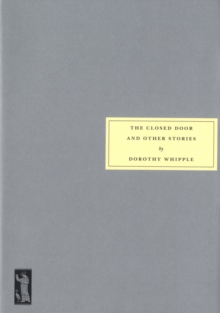 The Closed Door and Other Stories

These ten short stories are a selection made from three volumes of stories that Dorothy Whipple published in her lifetime.

Five of them were read on BBC Radio 4 from 22-26 October.Dorothy Whipple's key theme is 'Live and Let Live'. And what she describes throughout her short stories are people, and particularly parents, who defy this maxim.

For this reason her work is timeless, like all great writing.

It is irrelevant that Dorothy Whipple's novels were set in an era when middle-class women expected to have a maid; when fish knives were used for eating fish; when children did what they were told.

The moral universe she creates has not changed: there are bullies in every part of society; people try their best but often fail; they would like to be unselfish but sometimes are greedy.Like George Eliot, like Mrs Gaskell, like EM Forster, Dorothy Whipple describes men and women in their social milieu, which in her case is the inter-war period, and shows them being all- too human.

But her books are not nostalgia reads either, any more than reading George Eliot or Forster is a nostalgia read, nor are they old-fashioned or simplistic. Her prose, it is true, is pure, uncluttered, straightforward, pared down to the bone and never labours the point; her subtlety is the reason why so many people generally those who have not read her overlook her excellence.

But the TLS wrote in 1941, about her second volume of stories, After Tea, 'Nobody is more shrewd than Mrs. Whipple in hitting off domestic relations or the small foibles of everyday life' and in 1961, after the publication of Wednesday: 'Economy and absence of fuss these are Mrs. Whipple's outstanding virtues as a writer.'While Anthony Burgess, notorious for his dislike of 'women writers', commented in 1961 that 'these stories of the commonplace, with their commonplace-seeming style, are illuminating and startling.'Above all, Dorothy Whipple is a storyteller.

Persephone has published four of her novels and each one is a page- turner; but it is a feat indeed to make a short story into a page-turner since normally a story is a photograph, an impression, an atmosphere. The plots are certainly 'quiet' Ernest and Alice oppress their daughter, a woman is divorced by her husband and only allowed to see her children on Wednesday afternoons, a man puts flowers on his late wife's grave but the effect on our empathy for, and understanding of, her characters is profound.

Dorothy Whipple is a deeply observant and compassionate - and timeless writer; at last she is being acknowledged as the superb writer she is.