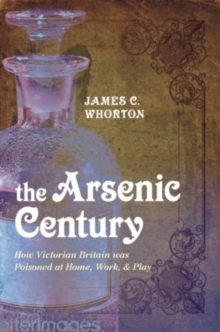 The arsenic century : how Victorian Britain was poisoned at home, work, and play

By: Whorton, James C. (Professor Emeritus of the History of Medicine ,University of Washington, Seattle)

Arsenic is rightly infamous as the poison of choice for Victorian murderers.

Yet the great majority of fatalities from arsenic in the nineteenth century came not from intentional poisoning, but from accident.

Kept in many homes for the purpose of poisoning rats, the white powder was easily mistaken for sugar or flour and often incorporated into the family dinner.

It was also widely present in green dyes, used to tint everything from candles and candies to curtains, wallpaper, and clothing (it was arsenic in old lace that was the danger).

Whether at home amidst arsenical curtains and wallpapers, at work manufacturing these products, or at play swirling about the papered, curtained ballroom inarsenical gowns and gloves, no one was beyond the poison's reach.

Drawing on the medical, legal, and popular literature of the time, The Arsenic Century paints a vivid picture of its wide-ranging and insidious presence in Victorian daily life, weaving together the history of its emergence as a nearly inescapable household hazard with the sordid story of its frequent employment as a tool of murder and suicide. And ultimately, as the final chapter suggests, arsenic in Victorian Britain was very much the pilot episode for a series of environmentalpoisoning dramas that grew ever more common during the twentieth century and still has no end in sight.