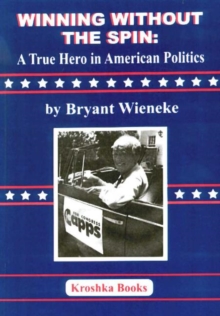 Winning Without the Spin : A True Hero In American Politics

This is the story of how Walter Capps made it to Congress.

A long-time religious studies professor with no political experience, Capps shocked the 22nd district of California and the nation in 1996 by unseating a Contract-With-America Republican and becoming the first Democratic Representative from that District in 50 years.

In a hard-fought and high-profile campaign, Capps maintained his principles -- as well as his sense of humour -- while waging a personal battle against the compromises every politician is tempted to make.

Winning Without the Spin is also the story of the campaign itself, seen through the eyes of the author, a political novice whose sense of the absurd increased with every hour on the campaign trail.

Throughout the history of American politics, few, if any, books have chronicles the day-to-day aspects of the campaign office in such detail, with anecdotes describing everything from personal power plays by staff to the day Wally Baer fixed the toilet.

On the campaign trail, the ridiculous melded with the sublime on a daily basis.

Above all this book is a tribute to the memory of Walter Capps, who brought his unique brand of politics to the floor of the U.S.

House of Representatives for only 10 months before this sudden death of a heart attack at Dulles Airport in October 1997.