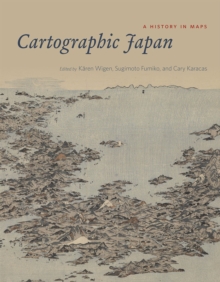 Cartographic Japan : a history in maps

Miles of shelf space in contemporary Japanese bookstores and libraries are devoted to travel guides, walking maps, and topical atlases.

Young Japanese children are taught how to properly map their classrooms and schoolgrounds.

Today, Japanese people are zealous producers and consumers of cartography, and maps are an integral part of daily life.

But this was not always the case: a thousand years ago, maps were solely a privilege of the ruling elite in Japan.

Only in the past four hundred years has Japanese cartography truly taken off, and between the dawn of Japan's cartographic explosion and today, the nation's society and landscape have undergone major transformations.

At every point, maps have documented those monumental changes.

Cartographic Japan offers a rich introduction to the resulting treasure trove, with close analysis of one hundred maps from the late 1500s to the present day, each one treated as a distinctive window onto Japan's tumultuous history. Sixty distinguished contributors-hailing from Japan, North America, Europe, and Australia-uncover the meanings behind a key selection of these maps, situating them in historical context and explaining how they were made, read, and used at the time.