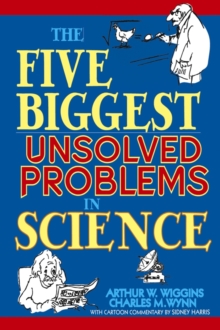 An in-depth look at the theories behind the most intriguing puzzles in physics, chemistry, biology, earth science, and astronomy In The Five Biggest Ideas in Science, authors Arthur W.

Now, they tackle the questions that science has been unable to answer-so far.

Choosing one unsolved problem from each discipline, they explore the current scientific thinking behind these questions: How are particle masses determined?

How did simple atoms first combine to form complex molecules?

What role does the genome play in the development of life?

Why is it so difficult to predict the weather? And what is the future of the universe? Featuring cartoons by Sidney Harris, the book includes discussions of recent theories such as the God particle, string theory, "brane" theories, and the Theory of Everything and also explores other science questions.

Charles M. Wynn (Willimantic, CT) is a Professor of Chemistry at Eastern Connecticut State College.They collaborated on The Five Biggest Ideas in Science (0-471-13812-6).