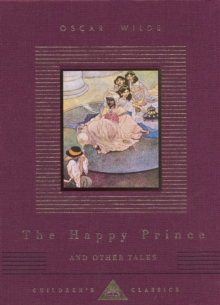 The happy prince and other tales

By: Wilde, Oscar,  Robinson, Charles(Illustrated by)

The five original fairy tales included in this volume were first published by Davis Nutt in 1888.

Although it is said that Wilde wrote them for his two young sons, the author himself claimed they were '. . . . not for children, but for childlike people from eighteen to eighty'.

Since then the stories have been constantly reprinted and, despite the author's disclaimer, children have made the tales their own, a particular favourite being 'The Selfish Giant' - the highly moral story of the giant who banished children from his garden, so that spring never came.

Charles Robinson, who produced the illustrations for a special edition first published in 1913, brought to the book a feeliong for its innate sadness that exactly fits the poetry of Wilde's text.