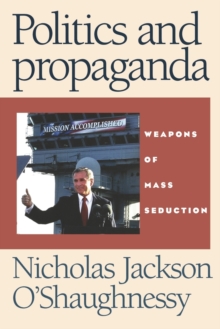 By: O'Shaughnessy, Nicholas,  Wilding, Caroline(Index by)

The twentieth century has been called "the century of propaganda".

This book explores the concept of propaganda in a genuinely multi-disciplinary way.

It begins by defining what propaganda is and how it came into existence, before analysing the three concepts that underpin all propaganda - symbolism, rhetoric and myth.

The book then looks at the key elements of propaganda, namely emotion, hyperbole, manipulation and utopla, before presenting a unique theory that the core of propoganda lies in a basic social construction of enmity.

Points made in the book are backed up by illuminating case studies from recent history that focus on spin, the war in Afghanistan, single-issue groups, negative advertising, and a powerful final chapter analysing the war in Iraq in 2003.