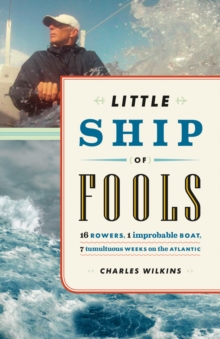 Longlisted for the 2013 Charles Taylor Prize The dramatic and hilarious story of risk and survival, as well as the importance of our connections to the planet, on a human-powered journey across the ocean. It was to be an expedition like no other--a run across the Atlantic from Morocco to Barbados aboard an experimental rowboat.

There would be no support vessel, no stored water, no sails or motor.

The boat's crew of sixteen included several veterans of U.S. college rowing, a number of triathletes, a woman who had rowed both the Atlantic and Indian Oceans, and a scrawny sexagenarian looking for a last great challenge--our chronicler, Charles Wilkins. When he joined the expedition, Wilkins had never swung an oar in earnest.

Accompanied by a devoted crew of misadventurers, Wilkins takes the reader along for seven weeks of rationed food, extreme sleep deprivation, and life-threatening seas--as well as sharks, whales, and an ever-disintegrating boat.

Little Ship of Fools is a rich and fascinating story of courage, community, the importance of risk in our lives, and the resilience and depth of the human spirit.