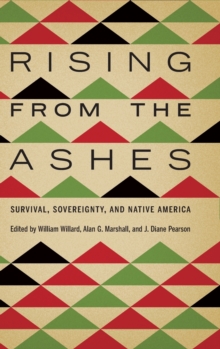 Rising from the Ashes : Survival, Sovereignty, and Native America

Rising from the Ashes explores continuing Native American political, social, and cultural survival and resilience with a focus on the life of Numiipuu (Nez Perce) anthropologist Archie M.

Phinney. He lived through tumultuous times as the Bureau of Indian Affairs implemented the Indian Reorganization Act, and he built a successful career as an indigenous nationalist, promoting strong, independent American Indian nations. Rising from the Ashes analyzes concepts of indigenous nationalism and notions of American Indian citizenship before and after tribes found themselves within the boundaries of the United States.

Anchoring the collection is a twenty-first-century analysis of American Indian decolonization, sovereignty, and tribal responsibilities and responses.