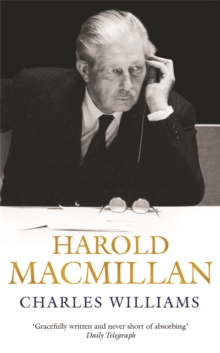 A masterly biography of a great Conservative Prime Minister (and publisher) - Harold Macmillan (1894-1986). Harold Macmillan was a figure of paradox. Outwardly, it was Edwardian elegance and civilised urbanity.

Inwardly, it was emotional damage from his wife's open adultery and his progressive perplexity at the onward march of time. The First World War showed the courageous soldier.

From then on, it was politics, rather than the family business of publishing, which was to be his future.

Nevertheless, although he supported Churchill in the 1930s he was deemed boring - and certainly not ministerial material. All changed with the Second World War. Appointed Minister in Residence in North Africa, Macmillan's career flowered.

After the War he became indispensable to Conservative Cabinets and as Churchill's Minister of Housing in the early 1950s he achieved the target, against all expectations, of 300,000 houses annually.

Thereafter, he was Eden's Foreign Secretary and Chancellor but by then Macmillan had become openly ambitious.

Over the Suez affair in 1956 he played a difficult - and somewhat devious - hand. Eden's resignation left him as the clear choice of his Cabinet colleagues to become Prime Minister. From 1957 to 1962, Macmillan was a good - some would say a great - Prime Minister. By 1962, however, his government was looking tired.

The Profumo affair in 1963 was particularly damaging, and in the autumn of 1963 his health forced him to retire.