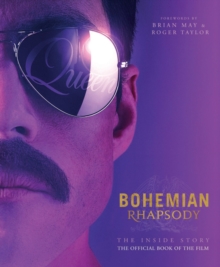 Bohemian Rhapsody : the official book of the movie

The author has interviewed key cast and crew members to reveal how Freddie Mercury and Queen's incredible story was brought to the big screen.

Many of Queen's pivotal moments were recreated for the film - including Live Aid and other key performances - and are described and shown in this authorized book of the 2018 movie.

These larger-than-life characters were reproduced in stunning detail for the big screen.

Picture-heavy, Bohemian Rhapsody: The Inside Story includes behind-the-scenes photographs and movie stills as well as images of the band from the 1970s to the 1990s.

The author shares how the story, events, music, props and costumes were developed for the film.

Bohemian Rhapsody: The Inside Story is a riveting read as well as a meaningful souvenir for fans of Queen, their music and cinema-goers preparing for the unforgettable movie experience that will is Bohemian Rhapsody.