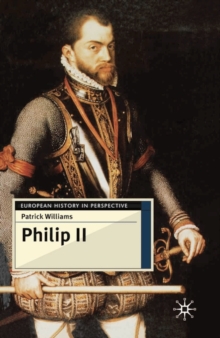 By: Williams, Patrick (Profesor of Spanish History, University of Portsmouth)

Part of the European History in Perspective series

Philip II ranks among the handful of men who have so dominated the epoch in which they lived as to have it named after them.

This was partly because Philip was such a powerful personality and partly because the second half of the 16th century was such a definitive period in European history, leaving the continent divided into a Protestant north and a Catholic south and emphasizing the development of the nation state.

Philip II was fundamental in this: the agent of the Catholic Reform, he was also the "bete noir" of incipient nationalism in many Protestant countries of the north, notably in England and the Dutch Republic.

He sought to conquer or control several other kingdoms of western Europe - he sent armadas against England; he involved himself repeatedly in the French civil wars; he initiated the Eighty Years' War against the Dutch; and he united Spain and Portugal (and their empires).

The history of Philip II is, it would appear, inevitably the history of Europe and much of the New World in the second half of the 16th century.