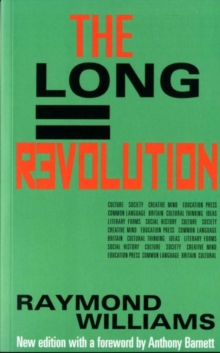 Raymond Williams was one of the world's leading cultural critics.

With this book, Williams brilliantly documents the exciting birth of the popular press, and explores the growth of the reading public in English-speaking culture in Western Society.

The 'Long Revolution' of the title is the third revolution of culture after the democratic revolution and the industrial revolution.

Almost uniquely, William's work bridged the divides between aesthetic and socio-economic inquiry, between Marxist thought and mainstream liberal thought, and between the modern and post-modern world. Continuing the theme he began so successfully in Culture and Society, Williams examines the gradual change, which took over our political, economic, and cultural life.

He placed special emphasis on the 'creative mind' in relation to social and cultural thinking.

After discussing the theory of culture he turns to a fascinating historical study of such institutions as education and the press, traces the development of a common language, and reveals the links between ideas, literary forms, and social history.