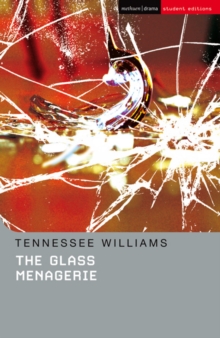 By: Williams, Tennessee,  Bottoms, Stephen(Edited by)

One of Tennessee Williams' most popular plays in a special annotated edition for school and college students. "The Glass Menagerie", Tennessee Williams' first great popular success and an autobiographical play about his mother and sister, launched the brilliant and controversial career of this ground-breaking American playwright.

Set in St Louis during the depression era of the 1930s, it is the poignant drama of a family's gradual disintegration, under pressure both from outside and within.

A frustrated mother persuades her rebellious son to provide a 'gentleman caller' for her shy, crippled daughter, but her romantic dreams are shattered by the intervention of harsh reality.

This edition provides the author's preferred text, available for the first time in the United Kingdom, and includes Williams' essay on the impact of sudden fame on a struggling writer, "The Catastrophe of Success", as well as a short section of Williams' own production notes.