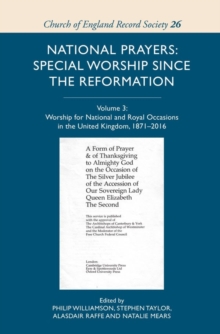 National Prayers: Special Worship since the Refo - Volume III: Worship for National and Royal Occasions in the United Kingdom, 1871-2016

Since the sixteenth century, the governments and established churches of the British Isles have summoned the nation to special acts of public worship during periods of anxiety and crisis, at times of celebration, or for annual commemoration and remembrance.

These special prayers, special days of worship and anniversary commemorations were national events, reaching into every parish in England and Wales, in Scotland, and in Ireland.

They had considerable religious, ecclesiastical, political, ideological, moral and social significance, and they produced important texts: proclamations, council orders, addresses and - in England and Wales, and in Ireland - prayers or complete liturgies which for specified periods supplemented or replaced the services in the Book of Common Prayer.

Many of these acts of special worship and most of the texts have escaped historical notice.

National Prayers: Special Worship since the Reformation, in four volumes, provides the edited texts, commentaries and source notes for each of the nearly nine hundred occasions of special worship, and for each of the annual commemorations. The third volume, Worship for National and Royal Occasions in the United Kingdom 1871-2016, reveals the considerable changes in special worship during modern times.

These include new subjects for special prayers, many services for royal events, wartime national days of prayer, and developing co-operation among leaders of the main British churches, together with transformations in the styles of worship in both the Church of England and the Church of Scotland