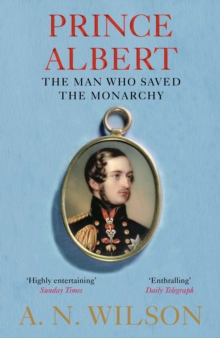 Prince Albert : the man who saved the monarchy

Chosen as a Book of the Year in The Times and the Daily Mail'Highly entertaining' Sunday Times'Enthralling' Daily TelegraphFor more than six decades, Queen Victoria ruled a great Empire at the height of its power.

Beside her for more than twenty of those years was the love of her life, her trusted husband and father of their nine children, Prince Albert.

But while Victoria is seen as the embodiment of her time, it was Prince Albert, A.

N. Wilson expertly argues, who was at the vanguard of Victorian Britain's transformation as a vibrant and extraordinary centre of political, technological, scientific and intellectual advancement.

A composer, engineer, soldier, politician, linguist and bibliophile, Prince Albert, more than any other royal, was truly a 'genius'.