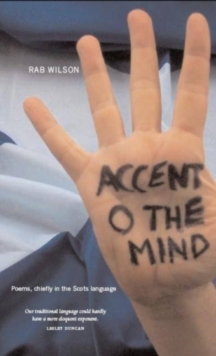 Accent o the mind : poems, chiefly in the Scots language

?His set of 15 interlinked sonnets, Cormilligan, about a late example of the Clearances in the south-west, has rightly been seen as a tour de force, combining, as it does, acute humanity and sense of landscape with technical virtuosity. ?Somewhaur in the Daurk?, his series of sonnets inspired by the Miners?

Strike of 1984-1985, gives the participants and their womenfolk a voice and a dignity that demand sympathy, regardless of political viewpoints.The poems he wrote as Wigtown Bard range from the historical to the satirical and enlivened Wigtown?s literary festival in 2004.

Individual poems, whether set in the local supermarket or the former mining towns of his youth, have humour, pathos, sometimes indignation, and always a warm immediacy.From Somerfield supermarket to Morris Dancing, text messaging and Buckfast to giving a voice to miners, Rab Wilson encompasses the variety of modern Scottish life through refreshingly honest, often humorous poetry: