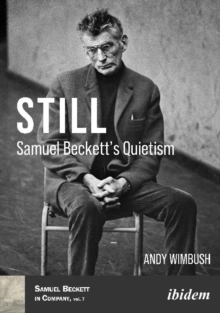 In the 1930s, a young Samuel Beckett confessed to a friend that he had been living his life according to an abject self-referring quietism. Andy Wimbush argues that quietisma philosophical and religious attitude of renunciation and will-lessnessis a key to understanding Becketts artistic vision and the development of his career as a fiction writer from his early novels Dream of Fair to Middling Women and Murphy to late short prose texts such as Stirrings Still and Company.

Cioran, Thomas a Kempis, Fyodor Dostoevsky, and Andre Gide, before turning it into an aesthetic that would liberate him from the powerful literary traditions of nineteenth-century realism and early twentieth-century high modernism.

Quietism, argues Andy Wimbush, was for Beckett a lifelong preoccupation that shaped his perspectives on art, relationships, ethics, and even notions of salvation.

But most of all it showed Beckett a way to renounce authorial power and write from a position of impotence, ignorance, and incoherence so as to produce a new kind of fiction that had, in Molloys words, the tranquility of decomposition.