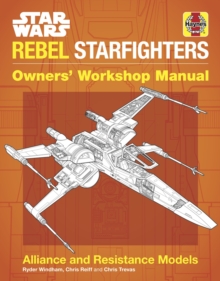 Just as the Rebel Alliance used various starfighters in its battle against the expansion of Imperial control across the galaxy, the subsequent Resistance used even more technologically advanced ships in its fight against the rise of the First Order.

Rebel starfighters have proved to be more-than-capable opponents for notoriously lethal Imperial and First Order TIE Fighters, with the X-Wing providing the core of the Rebel starfighter forces. The Rebel Starfighters Owners' Workshop Manual presents a thorough history of Rebel starfighters, including A-Wing, B-Wing, U-Wing, X-Wing and Y-Wing variants.

The history of Rebel starfighters is fully illustrated with numerous photographs from the Lucasfilm archives, in addition to schematics, exploded diagrams, and computer-generated artwork by Star WarsTM vehicle experts Chris Reiff and Chris Trevas.

Text is by Ryder Windham, author and co-author of more than 70 Star Wars books.

This Manual is the most thorough technical guide to Rebel starfighters available, and is fully authorized and approved by Lucasfilm.