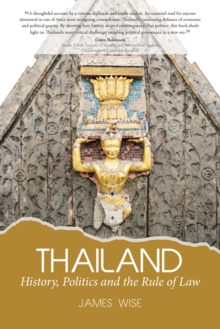 Thailand: History, Politics and the Rule of Law

This introductory book on Thai politics and the rule of law explains why chronically unstable Thailand struggles to mediate and adjudicate its political disputes.

It focuses on the continuities between the pre-1932 and post-1932 periods.

Historical continuities are also evident in the persistence of hierarchical thinking and ethno-nationalism, both of which have inhibited open debates about governance. And the rule of law does not always apply, owing to different principles underlying western and traditional Siamese law and the emergence of a distinctively Thai legal culture and consciousness. Thailand's governance was re-cast ambitiously in the 1890s, 1932 and 1997.

Since 1997, governing Thailand and developing Thailand's economy have become harder.

So political disputes have become more acute and the absence of a national consensus on dispute settlement mechanisms more obvious.

Until governance is again re-cast, Thailand's political instability and cycle of coups will continue.