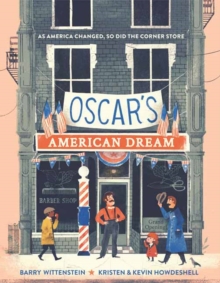 When Oscar lands on Ellis Island, he has only a suitcase and a down payment in his hands. And he has a dream-- to own his own barbershop. After it opens on the corner of Front St. and Second Ave, Oscar's barbershop becomes a beloved local fixture... until the day Oscar decides to move on and become a subway conductor. Over the years, this barbershop will change hands to become a lady's clothing store, then a soup kitchen. A coffee shop follows, then the space becomes an army recruitment center, then a candy shop. As the years pass and the world changes, the proud corner store stands tall, watching American history unfold around it. Barry Wittenstein and debut husband-and-wife illustration team Kristen and Kevin Howdeshell tell the rich, fascinating story of key moments in American history, as reflected through the eyes--and the patrons--of the corner store.