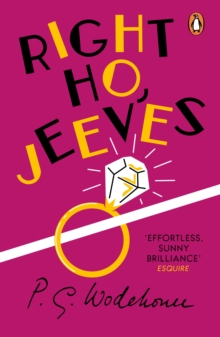 Part of the Jeeves & Wooster series

Wodehouse wrote the best English comic novels of the century' Sebastian Faulks'Heaven is Right Ho, Jeeves' Hugh Johnson'Jeeves, I'm engaged.''I hope you will be very happy, sir.''Don't be an ass.

I'm engaged to Miss Bassett.'Bertie is feeling most put out when he finds that his friend Gussie is seeking relationship advice from Jeeves.

In a stroke of genius, Bertie realises he can kill two birds with one stone, palming off his prize-giving duties to Gussie by assuring him that the object of his affections will be there. Several terrible misunderstandings later and facing chaos, Bertie turns, yet again, to Jeeves who swiftly and ingeniously saves the day. _________________________________________'Sublime comic genius' Ben Elton'A cavalcade of perfect joy' Caitlin Moran'Sunlit perfection...