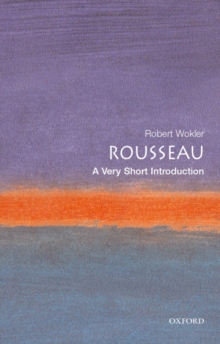 One of the most profound thinkers of modern history, Jean-Jacques Rousseau (1712-78) was a central figure of the European Enlightenment. He was also its most formidable critic, condemning the political, economic, theological, and sexual trappings of civilization along lines that would excite the enthusiasm of romantic individualists and radical revolutionaries alike.

In this study of Rousseau's life and works Robert Wokler shows how his philosophy of history, his theories of music and politics, his fiction, educational and religious writings, and even his botany, were all inspired by visionary ideals of mankind's self-realization in a condition of unfettered freedom.

He explains how, in regressing to classical republicanism, ancient mythology, direct communion with God, and solitude, Rousseau anticipated some post-modernist rejections of the Enlightenment as well.