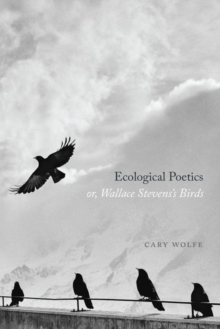 What do Stevens's evocations of birds, and his poems more generally, tell us about the relationship between human and nonhuman?

In this book, the noted theorist of posthumanism Cary Wolfe argues for a philosophical and theoretical reinvention of ecological poetics, using Stevens as a test case. Stevens, Wolfe argues, is an ecological poet in the sense that his places, worlds, and environments are co-created by the life forms that inhabit them.

Wolfe argues for a "nonrepresentational" conception of ecopoetics, showing how Stevens's poems reward study alongside theories of system, environment, and observation derived from a multitude of sources, from Ralph Waldo Emerson and Niklas Luhmann to Jacques Derrida and Stuart Kauffman.