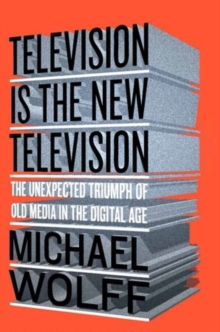 Television is the new television : the unexpected triumph of old media in the digital age

Super Bowl commercials are more valuable than ever. Banner ad space on Yahoo can be bought for a relative pittance. Sure, the darlings of new media-Buzzfeed, HuffPo, Politico, and many more-keep attracting ever more traffic, in some cases truly phenomenal traffic.

But as Michael Wolff shows in this fascinating and sure-to-be-controversial book, their buzz and venture financing rounds are based on assumptions that were wrong from the start, and become more wrong with each passing year.

The consequences of this folly are far reaching for anyone who cares about good journalism, enjoys bingeing on Netflix, works with advertising, or plans to have a role in the future of the Internet. Wolff set out to write an honest guide to the changing media landscape, based on a clear-eyed evaluation of who really makes money and how. His conclusion: the Web, social media, and various mobile platforms are not the new television.

Television is the new television. We all know that Google and Facebook are thriving by selling online ads-but they're aggregators, not content creators.

As major brands conclude that banner ads next to text basically don't work, the value of digital traffic to content-driven sites has plummeted, while the value of a television audience continues to rise.

Even if millions now watch television on their phones via their Netflix, Hulu, and HBO GO apps, that doesn't change the balance of power.

Television by any other name is the game everybody is trying to win-including outlets like The Wall Street Journal that never used to play the game at all. Drawing on his unparalleled sources in corner offices from Rockefeller Center to Beverly Hills, Wolff tells us what's really going on, which emperors have no clothes, and which supposed geniuses are due for a major fall.

Whether he riles you or makes you cheer, his book will change how you think about media, technology, and the way we live now.