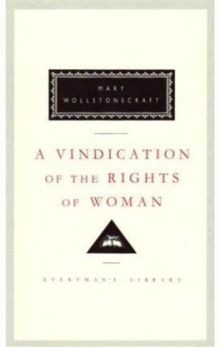 A Vindication of the Rights of Woman

Writing just after the French and American revolutions, Mary Wollstonecraft firmly established the demand for women's emancipation in the context of the ever-widening urge for human rights and individual freedom that followed in the wake of these two great upheavals.

She thereby opened the richest, most productive vein in feminist thought; and her success can be judged by the fact that her once radical polemic, through the efforts of the innumerable writers and activists she influenced, has become the accepted wisdom of the modern era.

The present edition contains a substantial essay by a major scholar to celebrate the bicentenary of publication in 1792.