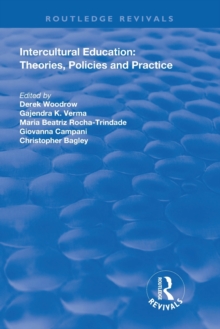 Part of the Routledge Revivals series

Published in 1997, this volume is a result of a number of European Union and Council of Europe initiatives.

The major stimulus came from an intensive course held in Lisbon in 1994 as part of two Erasmus networks exploring the nature of intercultural studies on a European-wide basis.

Although the concepts of multiculturalism and interculturalism have frequently been discussed within a British context, this book draws on the interlocking and comparative persectives of specialists in education and teacher training in several European countries including Spain, France, Italy, Britain and the Netherlands.

Educational policies and theories of identity are compared and there are special sections in multilinguism, teacher training, curriculum development, relationships between different ethnic groups and a vision of the future of intercultural education in Europe.

The issues discussed in the book are significant in the development of modern societies as they seek to come to terms with the revolution in intercultural relations brought about by mass communications and global transport.

The world is rapidly having to come to terms with cultural and social differences which can no longer be kept separate in their protective groups.