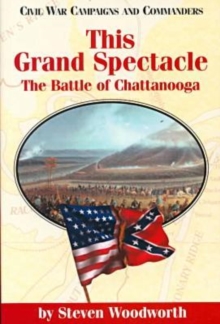 This Grand Spectacle : The Battle of Chattanooga

In the summer of 1863, Federal forces scored major victories at Gettysburg and Vicksburg, turning the tide of war in favor of the Union.

President Lincoln and his advisors now focused attention on the small town of Chattanooga, Tennessee.

The important railroad center offered a gateway to the Confederate heartland.

But just as complete victory in the West appeared imminent, General Braxton Bragg's reinforced Rebel army struck back at Chickamauga, driving the Federal invaders into Chattanooga, where they were soon besieged.

A desperate Lincoln now turned to the hero of Vicksburg, General U.

S. Grant, who directed the relief of the beleaguered garrison and, with the help of reinforcements from Virginia and Mississippi, turned a possible disaster into a stunning victory--a victory that opened the door to the Deep South and sealed the Confederacy's doom.

In this picturesque setting along the Tennessee River, as Federal troops scaled the heights of Lookout Mountain and Missionary Ridge, one Confederate general beheld a scene "grand and imposing in the extreme." Here Lincoln found the winning combination, the men who would lead his armies to ultimate victory--Grant, William T.

Sherman, and Philip Sheridan. For the Confederates, who invested such hope and so many resources, the disaster at Chattanooga would be a dark chapter, as veteran troops broke and ran before the Federal onslaught.

It was a body blow from which the Army of Tennessee, and indeed the Confederacy, would never recover.