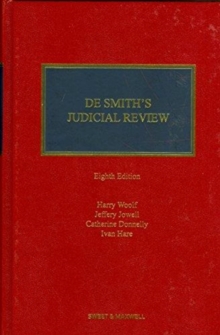 De Smith is the leading work on the history, principles and practice of judicial review.

The new edition reflects the continuing importance and complexity of judicial review, and incorporates recent developments in the area.

Frequently cited in judgments, De Smith's status as an authoritative account of the law is widely recognised. "Passes with distinction the only test that matters to lawyers who are advising clients, or to judges who have to decide cases: it supplies the answers to complex legal problems ... it is superbly written." - The Times The new edition deals with domestic grounds of review, challenges under the Human Rights Act 1998 and the use of European Community law in judicial review.

It: Provides solutions to the most complex legal problems relating to judicial review.

Analyses both the theoretical foundations of the subject and its practice.

Supplies comprehensive guidance on what to do at every stage of an action for judicial review.

Explains the impact of the latest case law and procedural developments.

Sets judicial review in the context of the fast-changing administrative justice system (including "proportionate dispute resolution", the new tribunal system, recourse to ombudsmen).

Clarifies complex changes in substantive review, including proportionality and legitimate expectations, against a background of a developing "culture of justification".

Considers the often complex and controversial questions of which defendants and decisions are subject to judicial review Deals comprehensively with the grounds of review in the following categories: illegality, lack of procedural fairness and irrationality or unreasonableness (Substantive Review and Justification) Full coverage of procedures and remedies, funding and costs.