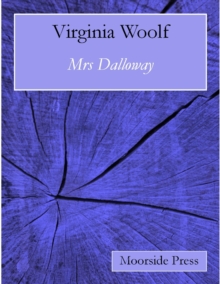 Considered by many critics to be Woolf's masterpiece, Mrs Dalloway was published by Hogarth Press in 1925.

The plot follows a single day in the lead up to a party being hosted by Clarissa Dalloway, interspersed with flashbacks and switches in point of view to other principal characters so as to provide a background of their lives and comment on the social structure of the 1920s.

In addition to Mrs Dalloway, the other focus is Septimus Warren Smith, a veteran of the war who suffers from 'shell shock'.

Though the two never meet, the hinge of the day's activities is Smith's suicide and the subsequent impact it has on Mrs Dalloway's thoughts - she thinks him quite admirable.