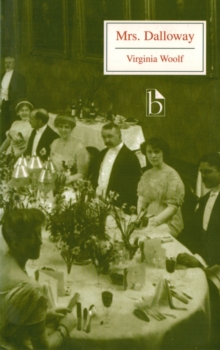 All this must go on without her; did she resent it; or did it not somehow become consoling to believe that death ended absolutely?

But that somehow in the streets of London, on the ebb and flow of things, here, there, she survived. Virginia Woolf (1882-1941) is now generally recognised as the author of two of the twentieth century's greatest literary works, To the Lighthouse and Mrs. Dalloway, both of which employ a style of narration that has come to be known as ""stream of consciousness,"" which focuses on the interior-and not always logical-movement of thoughts that make up the better part of most people's psyches. Woolf's 1925 novel, Mrs. Dalloway, is about the casualties of early twentieth-century life, and she explores the gendered forms of mental illness, and the social repercussions of feminism, homosexuality, and colonialism.

The central consciousness is that of the title character, Clarissa Dalloway, on the day of a dinner party that she is giving.

Moving through the relatively uneventful preparations, the arrival of the guests, and the rituals of hosting a party, Clarissa's thoughts wander across past, present, and into the future.

Throughout the relatively mundane actions through which the book follows her, she is slowly revealed by means of her interior monologues of memory and reflection to be a most interesting person who has been squeezed by society into a rather ordinary role.

The narrative broadens to include others in her life, most notably Septimus Warren Smith, a shell-shock victim whose life has had no direct connection to Clarissa's, but who in many ways can be read as a male parallel. This Broadview edition provides a reliable text at a very reasonable price.

It contains textual notes but no appendices or introduction.