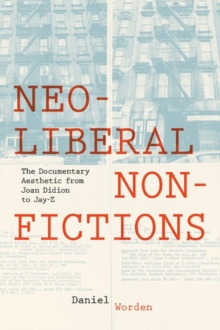 Neoliberal Nonfictions : The Documentary Aesthetic from Joan Didion to Jay-Z

With the ascendancy of neoliberalism in American culture beginning in the 1960s, the political structures governing private lives became more opaque and obscure.

Neoliberal Nonfictions argues that a new style of documentary art emerged to articulate the fissures between individual experience and reality in the era of finance capitalism.

In this wide-ranging study, Daniel Worden touches on issues ranging from urban poverty and criminal justice to environmental collapse and international politics.

He examines the impact of local struggles and global markets on music, from D.

City. He details the emergence of the hustler as an icon of neoliberal individualism in Jay-Z's autobiography Decoded, Alex Haley's Autobiography of Malcom X, and Hunter S.

Thompson's "gonzo" journalism. He looks at how contemporary works such as Maggie Nelson's memoir The Red Parts and Taryn Simon's photography series The Innocents challenge the moral simplifications of traditional true crime writing.

In his conclusion, he explores the dominance of memoir as a literary mode in the neoliberal era, particularly focusing on works by Joan Didion and Dave Eggers. Documentary has become the aesthetic of our age, harnessing the irreconcilable distance between individual and society as a site for aesthetic experimentation across media, from journalism and photography to memoir, music, and film.

Both a symptom of and a response to the emergence of economic neoliberalism, the documentary aesthetic is central to how we understand ourselves and our world today.