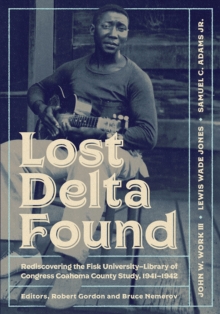 Blues Hall of Fame Inductee, 2019 - A "Classic of Blues Literature"In 1941 and '42 African American scholars from Fisk University-among them the noted composer and musicologist John W.

Their mission was "to document adequately the cultural and social backgrounds for music in the community." Among the fruits of the project were the earliest recordings by the legendary blues singer and guitarist Muddy Waters.

The hallmark of the study was to have been a joint publication of its findings by Fisk and the Library of Congress.

While this publication was never completed, Lost Delta Found is composed of the writings, interviews, notes, and musical transcriptions produced by Work, Jones, and Adams in the Coahoma County study.

Their work captures, with compelling immediacy, a place, a people, a way of life, and a set of rich musical traditions as they existed in the 1940s.