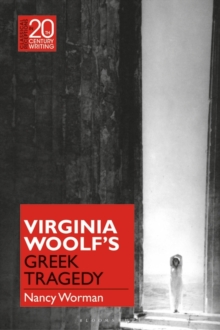 Part of the Classical Receptions in Twentieth-Century Writing series

In Woolf's writings Greece and Greek tragedy in particular shape an exoticized aesthetic space that both emerges from and enables critique of the cosy settings and colonialist conceits of elite (and largely male) British attitudes toward culture and politics.

Rather than highlighting Woolf's exclusion from male intellectual purviews, as so many scholars have emphasized, this book urges attention on how her engagements with Greek tragedy both collude with and challenge modernist aesthetics and contemporary politics. Woolf's encounters with and uses of Greek tragedy fantasize an alternative perceptual capacity that correlates to feminine (and feminist) modes, which are depicted in her writings as alternately defiant and choral.

In this scheme, Greek tragedy is something of a dreamland, the mysterious dynamics of which Woolf treats as transcending cultural attitudes that hinge upon imperialist adventuring and violence.

As scholars have recognized, especially in recent decades, the exoticizing gestures central to the work of so many modernists have uncomfortable political underpinnings, since they frequently inhabit imperialist and colonialist perspectives while appearing to critique them.

Unlike most scholars, Nancy Worman argues that Woolf is no exception, although the feminism and humour that inflects so many "Greek" elements in her work saves it from the worst offenses.