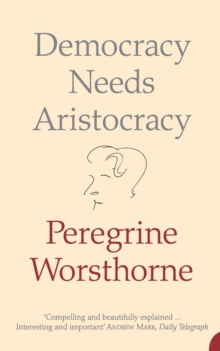 HarperPerennial
000718316X / 9780007183166
Paperback
305.5'2'0941
03/05/2005
Usually dispatched within 4 weeks
United Kingdom
20 cm viii, 232 p.
general  Learn More
Reprint. Originally published: as In defence of aristocracy. London: HarperCollins, 2004.
In one of the most explosive and hotly debated books of the past year, Sir Peregrine Worsthorne presents a reactionary and playful look at the origins, evolution and demise of the aristocracy and what we can expect to replace them. / Published to coincide with the upcoming General Election, this paperback edition is a timely and provocative look at British politics that is sure to stimulate debate. / A well-reviewed and hotly debated book in hardback. / Anthony Sampson, in his recent revision of his own seminal Anatomy of Britain: Who Runs This Place? concluded that the rise of the meritocracy

In one of the most explosive and hotly debated books of the past year, Sir Peregrine Worsthorne presents a reactionary and playful look at the origins, evolution and demise of the aristocracy and what we can expect to replace them.

Every country has the aristocracy it deserves; so what does it say about Britain that it is in the process of removing the last vestiges of political power from one of the most ancient hereditary aristocracies in the world, and one, moreover, whose record of public service has been impeccable?

But Sir Peregrine Worsthorne, one of our most influential and respected political commentators, argues that not only does the good far outweigh the bad, but that our aristocracy has contributed mightily to our stability and prosperity, and that without it we would have neither.

In this passionately argued and highly original essay Worsthorne forcefully demonstrates the shallowness of those who would celebrate the abolishment of hereditary peers in the House of Lords.For though many now forget it, Britain once had an upper class which was the envy of the world, and which, crucially, 'had enough in-built authority -- honed over three centuries -- and enough ancestral wisdom -- acquired over three centuries -- to dare to defy the arrogance of intellectuals from above and the emotions of the masses from below; to dare to resist the entrepreneurial imperative; to dare to try to raise the level of public conversation; to dare to put the public interest before private interests; and to dare to shape the nation's will and curb its appetites.'