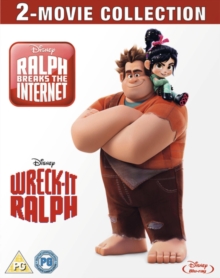 In 'Wreck-it Ralph' (2012), after 30 years of demolishing buildings in a popular video game, Ralph (voice of John C.

Reilly) longs to feel what it's like to be a good guy.

He takes off on a journey which leads him on a path through the gaming world, but in his attempt to be a hero he unwittingly releases a threatening enemy, putting all of the arcade in danger.

With the help of young racer Vanellope von Schweetz (Sarah Silverman), can Ralph repair the damage he has caused and learn how to save the day?

In the sequel 'Ralph Breaks the Internet' (2018) Vanellope's 'Sugar Rush' game is unplugged and Ralph decides the best way to fix it is to use the arcade's new Internet connection to go in search of the part they need.

As the best friends explore the strange and dangerous online world, Vanellope discovers thrilling new racing game 'Slaughter Race', where she is finally able to unleash her racing skills.

Meanwhile, Ralph becomes a viral celebrity, before he accidentally releases a devastating virus and breaks the Internet.

Can he find a way to repair the damage he has caused and stop Vanellope from leaving him alone in the arcade forever?