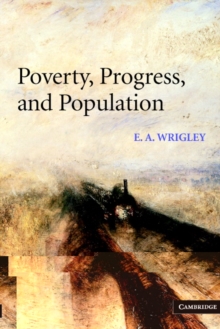 By: Wrigley, E. A. (University of Cambridge)

By the early nineteenth century England was very different economically from its continental neighbours.

A generation ago it was normal to attribute these differences to the 'industrial revolution' and to suppose that this was mainly the product of recent change, but no longer.

Current estimates suggest only slow growth during the period from 1760 1840.

This implies that the economy was much larger and more advanced by 1760 than had previously been supposed and suggests that growth in the preceding century or two must have been decisive in bringing about the 'divergence' of England.

Sir E. A. Wrigley, the leading historian of industrial Britain, here examines the issues which arise in this connection from three viewpoints: economic growth; the transformation of the urban-rural balance; and demographic change in the seventeenth and eighteenth centuries.