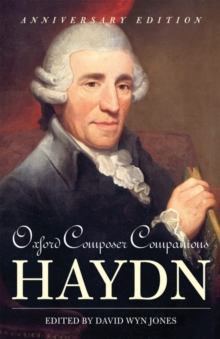 By: Wyn Jones, David (School of Music, Cardiff University)(Edited by)

In his lifetime Joseph Haydn enjoyed huge popularity throughout Europe.

As a composer of symphonies, quartets, masses, and oratorios he was readily acknowledged by Mozart, Beethoven, and others as a commanding figure.

He is one of the founding fathers of classical music, yet only in the last 50 years have his works become available in reliable editions, and much biographical detail has come to light at the same time.

Meanwhile, his music is more popular today than ithas been at any time since his death.

Published to coincide with the 200th anniversary of Haydn's death, this detailed, scholarly, and lively Companion draws together a wealth of biographical detail and expert analysis for the the first time in an accessible, engaging format.

It covers Haydn's life and times, and his music, including its performance and reception.

The Companion focuses on the period of Haydn's life (1732-1809), but extends forward to the end of the 20th century, to cover Haydn's reputation in the 19th century, attempts at complete editions, and modern scholarship.

Selected feature entries cover such topics as Haydn's life and personality, major genres in which he worked, performance practice, dissemination, and the Enlightenment.

The A-Z text is complemented by a full list of Haydn's works, family trees, a map, and a list of firstlines.