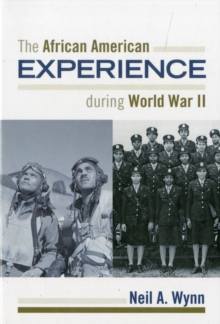 Part of the The African American Experience Series series

Drawing on more than thirty years of teaching and research, Neil A.

It is now widely accepted that these years were crucial in the development of the emerging Civil Rights movement through the economic and social impact of the war, as well as the military service itself.

Wynn examines the period within the broader context of the New Deal era of the 1930s and the Cold War of the 1950s, concluding that the war years were neither simply a continuation of earlier developments nor a prelude to later change.

Rather, this period was characterized by an intense transformation of black hopes and expectations, encouraged by real socio-economic shifts and departures in federal policy.

As the nation played a new world role in the developing Cold War, the tensions between America's stated beliefs and actual practices emphasized these issues and brought new forces into play.

More than a half century later, this book presents a much-needed up-to-date, short and readable interpretation of existing scholarship.

Accessible to general and student readers, it tells the story without jargon or theory while including the historiography and debate on particular issues.