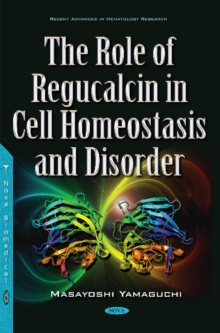 Cyclic AMP was a major molecule of interest, which played an important role as second messenger, contributing to signal transduction in the regulation of cellular function by peptide hormones.

After that, manifold proteins and their related molecules were demonstrated to participate in novel signaling pathways related to various cytokines in different types of cells.

The author of this book discovered a novel protein known as regucalcin, which suppresses manifold signaling pathways related to transcription activity.

After subsequent studies, regucalcin has been established to play a pivotal role in maintaining cell homeostasis and protecting it from disorders in various types of cells and tissues.

This book will provide information regarding regucalcin that plays a pivotal role in cell homeostasis and disorder.

This book will provide information regarding regucalcin and its pivotal role in cell homeostasis and disorder.