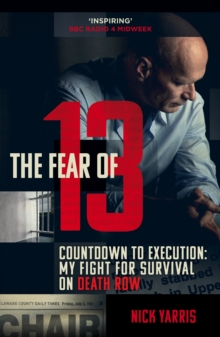 This is the memoir of Nick Yarris, who was wrongly convicted of rape and murder and spent 23 years on Death Row.

While he was in prison, to keep himself sane, Nick educated himself (including learning about triskaidekaphobia, the fear of 13 which gives the book its name).

Later, as the technology developed, Nick pressed for post-conviction DNA testing, which eventually led to him being acquitted of all charges.

Nick tells of his experiences with immediacy and passion, and narrates his tale to brilliant charismatic effect both here and in the film of the same name released in 2015.

Widely critically acclaimed, the film will debut on Netflix in November 2016 (date tbc) and this book is published to tie in with the release, adding a further dimension and more detail into Nick's compelling story.