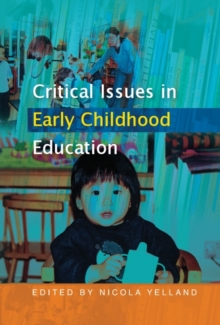 Open University Press
0335228488 / 9780335228485
Ebook
372.210941
31/12/2005
Available
258 pages
"This book is a valuable contribution to the creation of a more critical and theoretically diverse approach to early childhood policy and practice. Through many vivid examples and a varied cast-list of authors, both academics and practitioners, it shows the potential of this approach for pedagogical work in early childhood institutions and the education of the early childhood workforce."
Professor Peter Moss, Institute of Education, University of London, UK.

"In the era of No Child Left Behind in the U.S., you might think that the landscape of educational research and practice has been transformed into a row of 'scientific' models and unvarying curricular scripts. Nicola Yelland's volume will persuade you that, in contrast, the landscape in early childhood education is varied and full of unconventional angles. The authors examine virtually every significant aspect of curricular practice and postmodernist theory, while challenging readers to be skeptics themselves - to engage with risky ideas on the way to transformative actions."
Celia Genishi, Professor of Education, Teachers College, Columbia University, USA.

This book challenges long-established beliefs about early childhood education. It offers readers the opportunity to think about the aspects of their profession that are fundamental to providing effective and equitable educational opportunities for young children in the 21st century. Well-known contributors explore issues that are not only 'critical' in terms of being fundamental to early childhood education, but also 'critical' in that they present alternative ideas and use frameworks that are not traditional to the field. Organized in three parts, the book considers:

The chapters in the book focus on aspects of early childhood education that have for a long time been accepted as truisms, or have been too hard to deal with and thus often ignored. For example, they include a consideration of issues that range from examining play that might be sexual in focus or learning how to cope with traumatic events in young children's lives, to the ways in which popular culture and new literacies impact on what young children are interested in and how they can be engaged in learning with information and communications technology.

Essential reading for students in all early childhood studies programmes, as well as early childhood practitioners who want to engage in more reflective practices around their work.