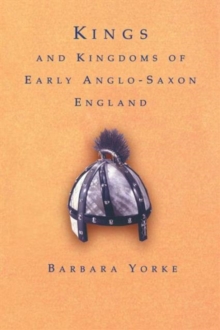 Kings and Kingdoms of Early Anglo-Saxon England provides a unique survey of the six major Anglo-Saxon kingdoms - Kent, the East Saxons, the East Angles, Northumbria, Mercia and Wessex - and their royal families, examining the most recent research in this field.

Barbara Yorke moves beyond narrative accounts of the various royal houses to explain issues such as the strategies of rule, the reasons for success and failure and the dynamics of change in the office of king.

A discusssion of Anglo-Saxon kingship prior to 600 AD, and an introduction to the main classes of documentary evidence supplements individual treatment of each kingdom.

The final chapter draws the conclusions together and deals with the four main facets of kingship in this period: kingship and overlordship; royal resources; royal and noble families; king and church.

Sixteen genealogical and regnal tables help to elucidate the history of the royal houses.

Kings and Kingdoms of Early Anglo-Saxon England provides an excellent introductory text for students and the general reader.