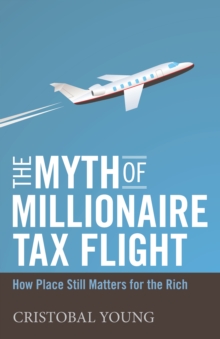 The Myth of Millionaire Tax Flight : How Place Still Matters for the Rich

Part of the Studies in Social Inequality series

In this age of globalization, many countries and U.S. states are worried about the tax flight of the rich.

As income inequality grows and U.S. states consider raising taxes on their wealthiest residents, there is a very real concern that these high rollers will board their private jets and fly away, taking their wealth with them.

Many assume that the importance of location to a person's success is at an all-time low.

Cristobal Young, however, makes the surprising argument that location is very important to the world's richest people.

Frequently, he says, place has a great deal to do with how they make their millions.

In The Myth of Millionaire Tax Flight, Young examines a trove of data on millionaires and billionaires-confidential tax returns, Forbes lists, and census records-and distills down surprising insights.

While economic elites have the resources and capacity to flee high-tax places, their actual migration is surprisingly limited.

For the rich, ongoing economic potential is tied to the place where they become successful-often where they are powerful insiders-and that success ultimately diminishes both the incentive and desire to migrate.

This important book debunks a powerful idea that has driven fiscal policy for years, and in doing so it clears the way for a new era.

Millionaire taxes, Young argues, could give states the funds to pay for infrastructure, entitlements, and other social programs to attract a group of people who are much more mobile-the younger generation.