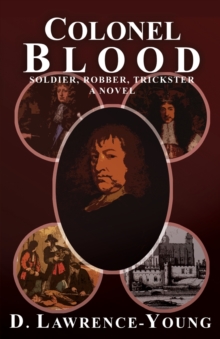 Colonel Blood - Soldier, Robber and Trickster has it all: royalty, love-affairs, lusty wenches, war and fighting.

But above all, an incredible robbery. This is the life of self-styled 'Colonel' Thomas Blood, the 17th century dashing Anglo-Irish adventurer who achieved fame by (almost) succeeding in stealing the Crown Jewels in 1671. But Blood did much more. He changed sides from being a Royalist to a Roundhead during the Civil War and also became involved in several treasonous plots.

He saved a friend from being hanged and twice attempted to kidnap his longtime enemy, the Duke of Osborne.

But despite being caught after his failed jewel robbery, he was saved by King Charles II.

Why was the king so magnanimous? What hold did Blood have over the 'Merry Monarch'?D.

Lawrence-Young has written one crime and over twenty historical novels which have been published in the UK, USA and Israel.

He loves writing about Shakespeare and the picturesque characters who make English history so fascinating.