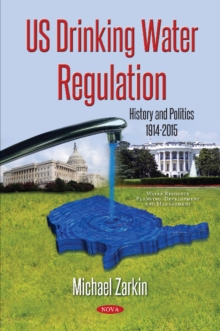 What constitutes safe drinking water? For more than a century, the US government has attempted to answer this question by setting national standards for drinking water quality.

In a federal system of governance, however, national standards only go so far.

State and local governments have long considered it their prerogative to select water supplies and treatment technologies decisions that largely determine whether or not national standards will ever be met.

Tragedies like the drinking water crisis in Flint, MI remind us that there are definite limits to what federal power can achieve.

Nevertheless, the quest to raise the quality of drinking water through national standards remains an important and underappreciated episode in the history of US public health policy.

In this book, Michael Zarkin traces the development of US drinking water standards, beginning with the earliest efforts by the US Public Health Service to craft national standards, and ending with the EPAs most recent efforts to implement the Safe Drinking Water Act.

Along the way, Dr Zarkin tells the story of the ideas, political battles, and scientific controversies that shaped our nations drinking water regulations.

In the end, Dr Zarkin concludes that drinking water regulation is made through an unconventional style of politics not found in other areas of US environmental policy.