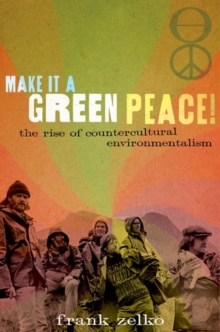 Make it a green peace! : the rise of countercultural environmentalism

The emergence of Greenpeace in the late 1960s from a loose-knit group of anti-nuclear and anti-whaling activists fundamentally changed the nature of environmentalism-its purpose, philosophy, and tactics-around the world. And yet there has been no comprehensive objective history of Greenpeace's origins-until now.

Make It a Green Peace! draws upon meeting minutes, internal correspondence, manifestos, philosophical writings, and interviews with former members to offer the first full account of the origins of what has become the most recognizable environmental non-governmental organization in the world.

Situating Greenpeace within the peace movement and counterculture of the 1960s, Frank Zelko provides a much deeper treatment of the group's groundbreaking brand of radical, media-savvy,direct-action environmentalism than has been previously attempted.

Zelko traces the complex intellectual and cultural roots of Greenpeace to the various protest movements of the 1950s and 1960s, highlighting the influence of Quakerism-with its practice of bearing witness-Native American spirituality, and thenon-violent resistance of Gandhi.

Unlike the more strait-laced, less confrontational Sierra Club and Audubon Society, early Greenpeacers smoked dope, dropped acid, wore their hair long, and put their bodies on the line-interposing themselves between the harpoons of whalers and the clubs of seal-hunters-to save the animals and achieve what they hoped would be a lasting transformation in the way humans regarded the natural world. And while it may not have achieved its most revolutionary goals,Greenpeace inarguably created a heightened awareness of environmental issues that endures to this day.

Narrating the key campaigns and arguments among the group's early members, Make It a Green Peace! vividly captures all the drama, pathos, and occasional moments of absurd comic relief of Greenpeace's tumultuous first decade.