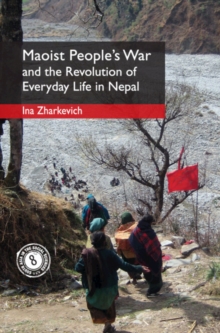 By: Zharkevich, Ina (University of Oxford)

Part of the South Asia in the Social Sciences series

By providing a rich ethnography of wartime social processes in the former Maoist heartland of Nepal, this book explores how the Maoist People's War (1996-2006) transformed Nepali society.

Drawing on long-term fieldwork with people who were located at the epicentre of the conflict, including both ardent Maoist supporters and 'reluctant rebels', it explores how a remote Himalayan village was forged as the centre of the Maoist rebellion, how its inhabitants coped with the situation of war and the Maoist regime of governance, and how they came to embrace the Maoist project and maintain ordinary life amidst the war while living in a guerilla enclave.

By focusing on people's everyday lives, the book illuminates how the everyday became a primary site of revolution of crafting new subjectivities, introducing 'new' social practices and displacing the 'old' ones, and reconfiguring the ways that people act in and think about the world through the process of 'embodied change'.