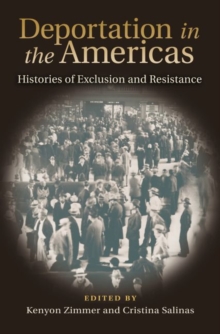 Deportation in the Americas : Histories of Exclusion and Resistance

In Deportation in the Americas: Histories of Exclusion and Resistance, editors Kenyon Zimmer and Cristina Salinas have compiled seven essays, adapted from the Walter Prescott Webb Memorial Lecture Series, that deeply consider deportation policy in the Americas and its global effects. These thoughtful pieces significantly contribute to a growing historiography on deportation within immigration studies-a field that usually focuses on arriving immigrants and their adaptation.

All contributors have expanded their analysis to include transnational and global histories, while recognizing that immigration policy is firmly developed within the structure of the nation-state.

Thus, the authors do not abandon national peculiarity regarding immigration policy, but as Emily Pope-Obeda observes, "from its very inception, immigration restriction was developed with one eye looking outward." Contributors note that deportation policy can signal friendship or cracks within the relationships between nations. Rather than solely focusing on immigration policy in the abstract, the authors remain cognizant of the very real effects domestic immigration policies have on deportees and push readers to think about how the mobility and lives of individuals come to be controlled by the state, as well as the ways in which immigrants and their allies have resisted and challenged deportation.

From the development of the concept of an "anchor baby" to continued policing of those who are foreign-born, Deportation in the Americas is an essential resource for understanding this critical and timely topic.